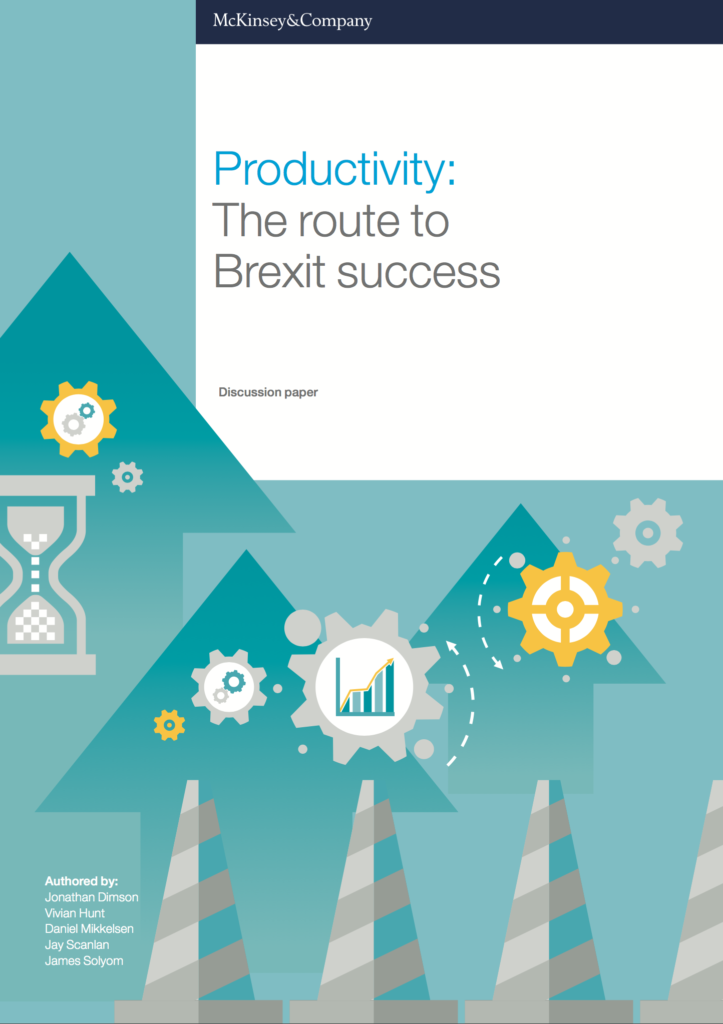 UK, January 13, 2017.- The United Kingdom’s post-Brexit future is uncertain. But one thing is clear: boosting economic growth will depend heavily on addressing long-standing productivity challenges. The UK government has committed itself to implementing the outcome of the June 23, 2016 referendum, when voters opted to leave the European Union. The big question is: what next? Most forecasts of how Brexit will affect the economy are pessimistic. Yet the economy has long faced challenges, such as weak growth, uneven wealth creation, and low productivity.

In this discussion paper, we examine the state of the British economy, especially its productivity record, before the Brexit vote. We then suggest six ways to improve the country’s economic fundamentals, so that it can adapt as smoothly as possible to whatever agreement is reached on the United Kingdom’s future relationship with the European Union. The vote for Brexit was a shock and has led to a high level of uncertainty for business. Nonetheless, Brexit can be a catalyst for positive change if the challenges ahead are addressed with imagination and determination.

A survey of the country’s regions and sectors shows an economic divide. On one side is London and high-productivity, traded sectors, such as pharmaceuticals, financial services, and technology. These sectors have accounted for the majority of GDP growth in the past decade. On the other side are slow-growing regions and lower-productivity industries, such as retail, construction, and government.

For every hour worked by a British worker, a German worker produces 36 percent more.  Much of this gap is due to the drag created by Britain’s large cohort of low-performing companies. Two-thirds of UK employees work for companies whose productivity is below average, adjusted for industry and size of company.

Why does productivity matter?

Why does this matter? Productivity is the fundamental driver of national prosperity, and hence of personal incomes and tax revenues.

The United Kingdom’s weak productivity has already hit households: recent research suggests that a large majority of them had flat or falling income from 2005 to 2014, creating the possibility that children in Britain will grow up to be poorer than their parents.

Productive economies also generate strong export performance and pay their way in the world. As American economist Paul Krugman puts it, “Productivity isn’t everything, but in the long run it is almost everything.”

Some forecasters have predicted that Brexit will lead to a slowing of the United Kingdom’s GDP growth during the next few years, although early forecasts of a dramatic fall in 2016 or 2017 output have been scaled back. This shock could exacerbate existing weakness in demand, a phenomenon that is common across many Western economies.

The potential economic impact of Brexit in the medium term (until 2030) will vary significantly, depending on the terms of the exit. Joining the European Economic Area (the Norwegian model) is widely believed to be the least costly, while a Free Trade Agreement (the Canadian or Swiss model) is seen as better than reverting to World Trade Organization rules (the China model). In brief, the more difficult it is for UK companies to gain access to the single market, the greater the medium-term economic hit will be to the United Kingdom.

The consequences are expected to include a reduction in trade (as a result of higher tariff and non-tariff barriers), reduced foreign direct investment (FDI), and lower availability of skills (due to changes to immigration policy). Only a small proportion of projected GDP losses is forecast to come from these direct effects.

The vast majority is expected to come from the knock-on effects on UK productivity.  Reduced trade, FDI, and the movement of people between the United Kingdom and the European Union could lead to less innovation, less investment, less competition, less access to talent, and fewer economies of scale. This will disproportionately harm the productive, traded sectors of the economy—Britain’s economic lifelines.

Brexit thus exacerbates the United Kingdom’s productivity challenge. The historical challenge was how to lift up the less productive sectors, companies, and regions. This challenge could become more difficult, because a reduction in trade and a weakening of the currency could lower the competitive pressures on domestic businesses. The new challenge is to also support the most productive, traded sectors of the economy.

In short, Brexit could both compound the United Kingdom’s demand-side weakness in the short term and broaden the United Kingdom’s long-standing productivity problem in the medium term. While there will be a real need to address the demand-side issues, the economic shock of leaving the European Union means there is a more urgent need to address long-standing constraints on the supply side. In that regard, Brexit could provide policy makers with the impetus to boost productivity.

After the United Kingdom leaves the European Union, its greatest opportunity may lie in increasing economic engagement, especially trade, with the rest of the world. Britain could be released from Europe’s common external tariff and be free to negotiate its own trade agreements. To date, the European Union has ratified trade deals with countries that account for less than a third of the value of the United Kingdom’s trade with non-EU countries. That means a large proportion of UK imports and exports are not covered by a trade deal and are subject to tariff and non-tariff barriers.

An International Monetary Fund study suggests that negotiating new free-trade agreements that reduce all tariffs to zero could lead to productivity gains worth more than 0.6 percent of GDP.   Interestingly, a significant proportion of the benefits could be delivered unilaterally, through the reduction of import tariffs. Unilateral reduction of import tariffs could provide UK consumers and businesses with lower-cost and better-quality imports, generate increased competition, and stimulate innovation.

The bigger prize rests in reducing non-tariff barriers, for example, by harmonising product standards, licensing, or other regulations, with non-EU trading partners. A detailed study examining the non-tariff barriers between the European Union and United States estimated they are equivalent to a 10 percent tariff.   For the United Kingdom, this suggests that removing them could translate into a 0.9 percent boost to GDP. Given that UK trade with non-US, non-EU trading partners is almost double its trade with the United States, the total potential gain could be significantly larger. However, negotiating a reduction in these barriers could be challenging and time consuming.

Further post-Brexit benefits could be realised through targeted deregulation. To a great extent, this will depend on the political viability of deregulation and the extent to which equivalent regulation is required to retain access to EU markets. Analysts have highlighted potential opportunities in relaxing the Working Time Directive as well as environmental, climate-change, and energy-efficiency regulations, such as the Renewable Energy Strategy. Other UK regulations, including restrictions on state aid, government procurement, value-added tax, and competition law, are more stringent than those set by the European Union.

Since these regulations were “gold plated” voluntarily, there may be limited appetite to change them after Brexit. Thus, there are potential benefits available to the United Kingdom from these new freedoms, especially for the traded sectors. However, even when taking an optimistic view, most commentators believe these will not outweigh, with respect to GDP, the costs of Brexit. Making up the shortfall will require addressing the United Kingdom’s long-standing productivity challenge.

Based on research and analysis that McKinsey has undertaken in the past few years, we have identified three medium-term and three long-term priorities. All of these are important, and all have been discussed at length over recent years. The prospect of Brexit makes them more urgent, but no easier to deliver.

A renewed focus on all six priorities will likely be needed to generate significant productivity gains. Individually many of these priorities could contribute more than £100 billion per year to the UK economy. We believe that collectively that there is an opportunity worth at least £250 billion per year, or more than 10 percent of the United Kingdom’s GDP.