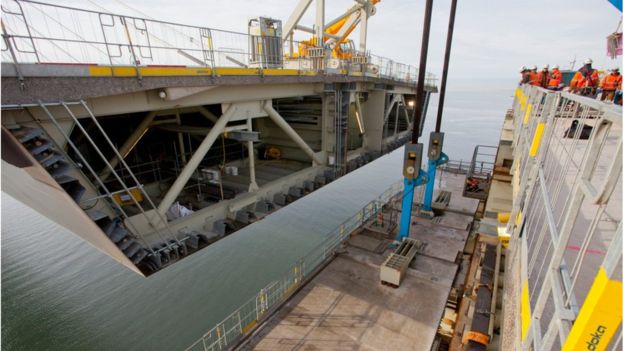 December 27, 2016:  Official video about the completion of Queensferry Crossing

Scotland, November 16, 2016.- The Scotsman, Scotland’s National Newspaper, has published progress on the works of Forth Replacement Crossing 2017 in which Doka UK is actively involved. For your interest, we reproduce below the details of this information, prepared by the journalist ILona Amos:

The second last piece of deck on the landmark new road bridge over the Forth has been carefully hoisted into place, joining Fife to the south shores for the first time. There is now more than 2km of deck in place on the Queensferry Crossing, with only a gap the length of an Olympic-size swimming pool remaining on the Edinburgh side.

A total of 35,000 tonnes steel, weighing the same as nearly 200 jumbo jets, will have gone into the deck by the time it is finished. Construction of the the £1.35 billion new bridge, which will be the third to span the Forth at Queensferry, began in June 2011. It will be the longest three-tower, cable-stayed bridge in the world and also the largest to feature cables that cross mid-span when it is completed in May next year. The crossing will stand 207m above high tide, equivalent to 48 double-decker buses stacked on top of each other, and 50 metres higher than existing Forth Road Bridge.

It was originally due to be completed next month but was delayed after bad weather in spring hampered construction. A total of 105 of the 110 deck units have now been lifted into position, leaving just 52 metres to complete the deck. This means the new bridge now stretches from Fife right across to the end of the south fan. The closure of the north and centre deck fans is the third of four principal closures required to complete the structure.

The next stage of work involves using ballast and adjusting cables to ensure the height is aligned and ready for the final closure of the sections. Scottish economy secretary Keith Brown said the project remains under budget and schedule to open in May. “Connecting all three of the Queensferry Crossing towers, from Fife right over to the south deck fan, is another example of the good progress being made on the project,” he said. “Despite the huge size and weight of the units being lifted, lifting them into place is a very precise operation.

“This is truly world-class engineering taking place to bridge the Firth of Forth for the third time in consecutive centuries. “Successfully building the new bridge and the road network requires careful planning and delivery of over 10,000 operations. “The workforce continue to do an excellent job in often very tough conditions. “Watching this iconic landmark take shape over the past five years has been remarkable.” Project director Michael Martin, of Forth Crossing Bridge Constructors, said: “In total we will have four principal deck closures on the Queensferry Crossing. “Earlier this year we closed the gap between the north tower deck span and the northern approach viaduct.

“Then, in October, we achieved closure between the centre and south tower deck spans. “We have now lifted the centre tower/north tower closure section into place and work is ongoing to fix it permanently into position. “We are continuing to make considerable progress on the project as a whole. “In fact, for the first time we can say that the three towers and their decks are now connected directly to Fife. “The focus now is on achieving the technically challenging final closure between the south tower and the southern approach viaduct, which is planned for early in the new year.” With an overall length of 2.7km and around 4km of new connecting roads, the new bridge will be the third to span the Forth at Queensferry. The iconic Forth Bridge was completed in 1890 and the Forth Road Bridge in 1964.

The new bridge was formally named the Queensferry Crossing in June 2013 following a public vote. It is estimated around 10 million man hours will be required to complete construction.

A new era for public transportation in Scotland: Forth Replacement Crossing 2017