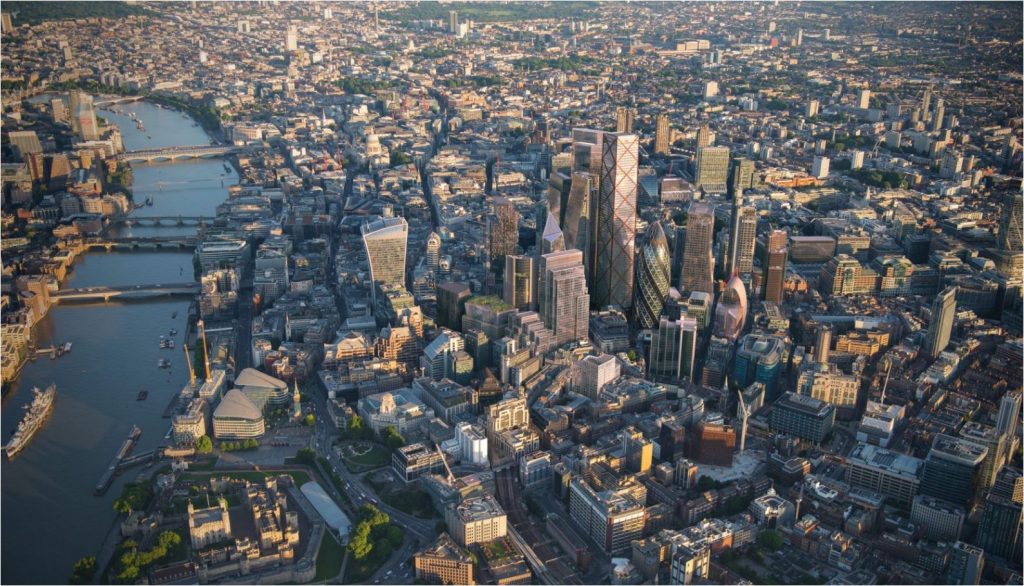 Doka UK 23 August 2018.- High-rise buildings are inherently impressive. The Shard, One Canada Square and the Gherkin are just a few of many high-rise structures which define London’s skyline. According to recent reports, numbers indicate there will be a rise in the construction of tall buildings over the next decade in the capital, including 13 skyscrapers – with one expected to top 290 metres in height. Specialising in the formwork for the construction of tall structures and buildings, here at Doka we understand the in-situ concrete construction process, from the initial planning stage through to completion. In this article we take a look into the ‘London Tall Buildings Survey’ produced by GL Hearn in combination with New London Architecture.

Planning and architecture forum, New London Architecture has announced the results of its fifth ‘London Tall Buildings Survey’ – and the results indicate buildings are on the rise in the capital.

Working with research partner GL Hearn, the study provides a comprehensive analysis of all tall buildings over 20 storeys, which are proposed, in planning or under construction in London.

“Since the first report published in 2014, 122 tall buildings have been completed and a further 96 are expected to be complete over the next two years”, Building Construction Design online report. Despite signs of a slowdown, London has 510 towers in the pipeline and a record number of 115 schemes are under construction, compared to 455 and 91 respectively, in 2016.

NLA continues: “London faces increasing challenges in accommodating a growing population, expected to reach over 11 million people by 2050, while commitments to contain the sprawl within the Green Belt prompts questions on how to make better use of the scarce amount of land available.

Recent years have seen a huge growth in the number of tall buildings going into the pipeline, showing that ‘building upwards’ is a response to densification. At the same time, concerns have grown, from both local communities and professionals, over the quality of design of these new towers, as well as on the need to protect London’s rich historic heritage, including questions on where new clusters of tall buildings would be more appropriate.

NLA conducts this annual survey to give an update on current trends on tall buildings in the capital. The report creates a snapshot of the overall pipeline of buildings of 20 stories or above in all London Boroughs. The 2018 report will update on the current pipeline, reflecting upon the effect of Brexit on new tall developments but also analysing what the new London Plan would mean for the future of tall buildings in London.”

Peter Murray, Chairman of New London Architecture said: “We continue to see a steady increase in the number of tall buildings coming forward and with London’s population continuing to increase and the demand for new homes only getting higher, our view remains that that well designed tall buildings, in the right place, are part of the solution. Uncertainties and challenges to deliver these tall buildings remain, which is perhaps why we are seeing a slight slowdown in the in the number of applications, construction starts and completions. However our reports over the past five years show us in the right places, towers allow us to use the finite resource of land very efficiently.”

Research Questions Covered in the Report

A common trend emerging suggests that living in tall buildings is becoming increasingly accepted as a key part of our housing mix with over 90% (458) of the tall buildings coming forward are residential and have the potential to deliver 106,000 new homes.

Online magazine, Building Construction Design reflects on the NLA survey findings: “The Build-to-Rent sector is also featuring more in tall buildings, reflecting the growing demand for well-designed homes for rent and interest from the investment sector. Data from EG shows that 30% of the proposed schemes in 2017 were Build-to-Rent compared with none in 2013.

Predictions in last year’s report that record numbers of applications were unlikely to continue seems to have materialised. Political and economic uncertainty, mainly due to Brexit, appears to have had a small impact. The rate of applications is down 10% from 2016 and 35% from 2015, although this was a bumper year due to the application of Greenwich Peninsula for over 40 tall buildings. If you take this away the number has been relatively consistent since 2013.

The demands on construction have also played a role as the survey indicates that delivering towers has become more challenging with only 18 tall buildings completed in 2017, representing a 30% drop from 2016 when 26 were completed. There was also a 25% fall in the number of tall buildings coming out of the ground with work only starting on 40 in 2017.

Almost a third of the entire pipeline is in Outer London, in zones 3, 4 and 5, particularly in Opportunity Areas and around transport connections, which are considered suitable locations for tall buildings in principal.

Bromley and Waltham Forest have tall buildings in the pipeline for the first time. This leaves just seven boroughs without any towers – Bexley, Enfield, Havering, Hillingdon, Merton, Kensington and Chelsea, and Richmond. But this is expected to change. Looking ahead we would expect locations like Bexley Riverside (Bexley), Meridian Water (Enfield), Hayes (Hillingdon), Kensal Rise (Kensington and Chelsea) and Mordon (Merton) to see some tall buildings proposed in the future given the nature of these locations. The Elizabeth Line, due to fully open from December 2019, will also act as a catalyst in the future bringing forward development along its route, especially in outer boroughs such as Ealing, Redbridge and Newham.”

Doka have contributed to many of the world’s tallest buildings – The Burj Khalifa, The Jeddah Tower and 432 Park Avenue to name a few – further details can be found by reading one of our past blog articles or you can find some of our most recent projects including wood wharf and Blackfriars here: 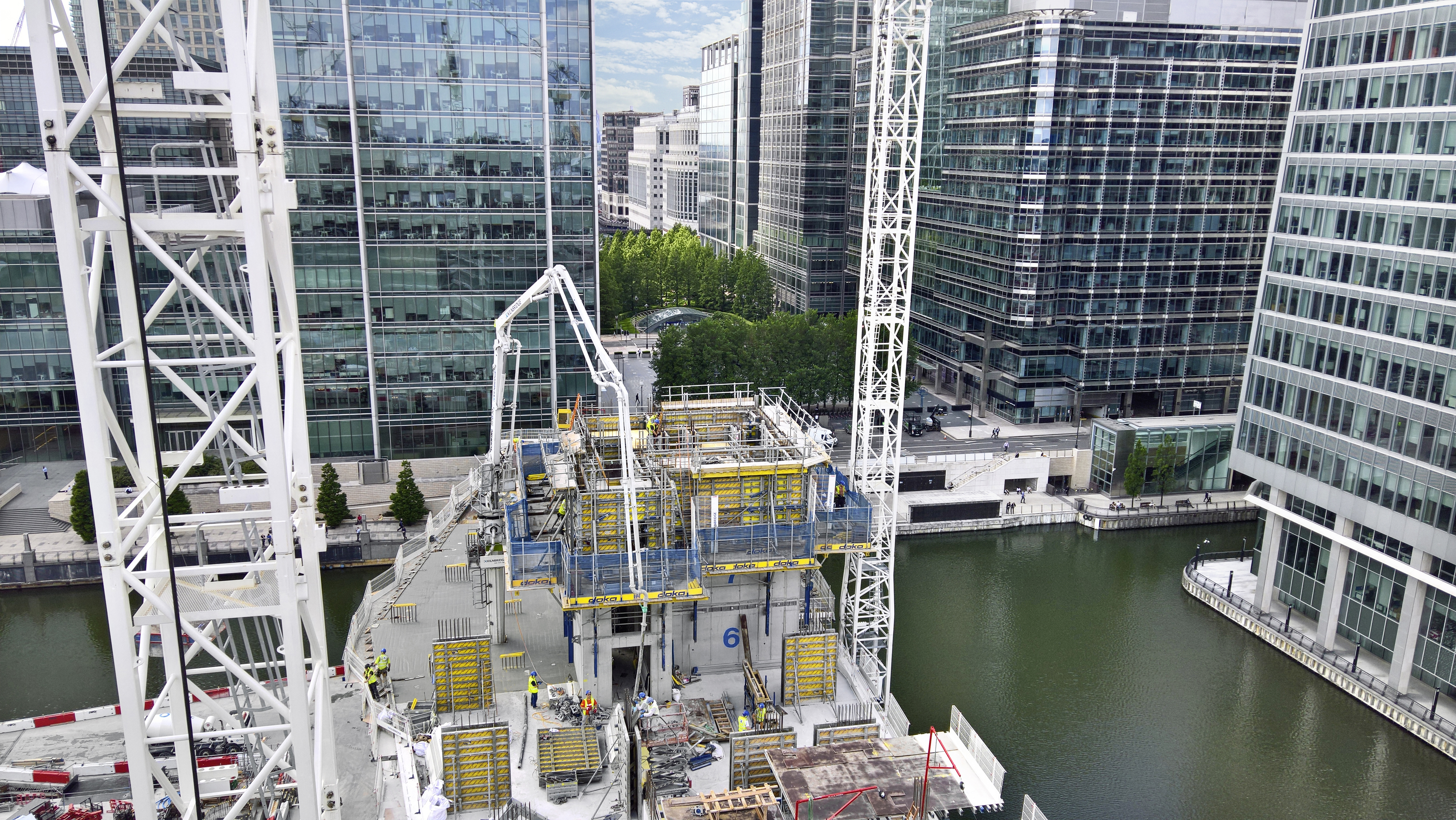 A fly-through video has been created for the New London Architecture’s annual London Tall Buildings Survey to help demonstrate a snapshot of the 500+ high-rise towers currently proposed capture the capitals changing skyline.