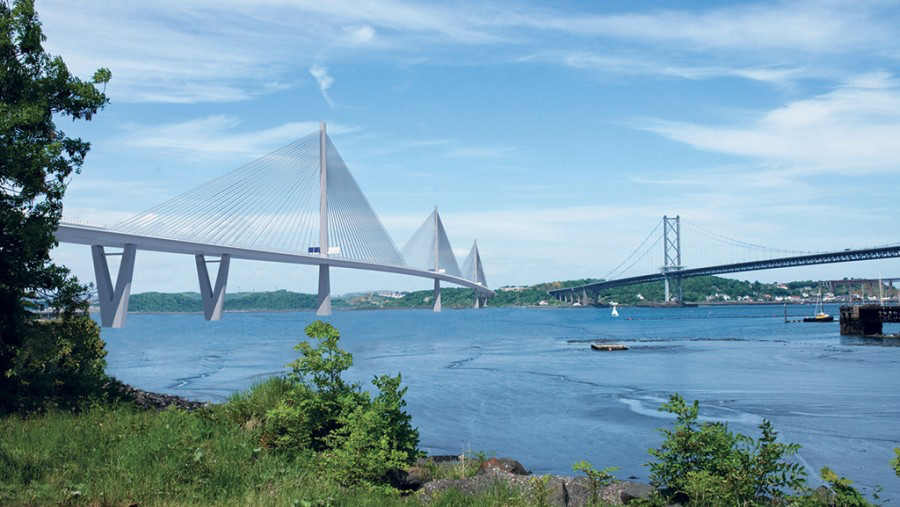 Contractors building the £1.3bn Queensferry Crossing have set a new record by creating the the longest free-standing cantilever in the world at 644m. The structure will become the longest three-tower, cable-stayed bridge in the world. The bridge deck sections are edging closer and closer by the day as engineers come close to linking the deck sections at the north and south sides of the bridge. When the weight of a 750 tonnes bridge section is lifted the deck deflects by 4m giving the impression the two decks will not meet. Once work is complete on the project in June 2017, the new Queensferry Crossing will stretch 2.7km in length and will include three single column towers and approach viaducts. Galliford Try is part of the four-company consortium that includes Hochtief, Dragados, and American Bridge of Pittsburgh in the US  building the main motorway bridge over the Firth of Forth under a £790m contract. The structure will become the longest three-tower, cable-stayed bridge in the world and also by far the longest to feature cables which cross mid-span. This innovative design provides extra strength and stiffness, allowing the towers and the deck to be more slender and elegant.

Scotland, 8th September 2016 – Bridges connect communities, cultures and challenges, while facilitating the daily living together. Doka UK is actively participating in the construction of the Forth Replacement Crossing. A spectacular bridge that will mean a whole new era for public transportation in Scotland. This new bridge sits along two other iconic bridges, the UNESCO World  Heritage  site, Fowler & Baker muscular designed  Rail bridge built in late 1880’s and the elegant and beautiful  Forth Road Suspension bridge which opened in 1964.

Transport Scotland is currently financing the build of a 3rd and new crossing known as the ‘Forth Replacement Crossing’ bridge, a different bridge design to its two close neighbours and will be the longest three tower cable stayed bridge in the world. Forth Crossing Bridge Constructors (FCBC) consortium are constructing the bridge directly creating over 1200 jobs  on this project, plus a large number of sub contract and supply order opportunities for Scottish and UK companies.

For the latest from the construction site you can also visit the Queensferry Crossing section of the Forth Bridges website provided by the Forth Bridges Forum, of which Transport Scotland is a leading member. To access more key facts about the Forth Replacement Crossing, including information about the progress of the bridge and connecting roads, including an overview of the Intelligent Transport System and the benefits for public transport; visit http://www.forth-bridges.co.uk/queensferry-crossing.html.